Our SV_Women Composers Project is designed to perform and record, over a 3-year period (2020-2022), 7 pieces by women composers from Scotland, from 3 different generations: 4 new works and 3 existing ones.  The 7 works are: 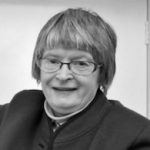 Janet Beat (b.1937) studied Music at Birmingham University & received the G D Cunnigham Award for her postgraduate research. Her composition teachers include Alexander Goehr & she received encouragement from Dallapiccola & Sir Michael Tippett & Daphne Oram. She was  the second woman composer in the UK to explore musique concrete in the late 1950s. She played the horn then held lecturing posts. In the 1970s established the electronic & recording studios for the RSAMD (now the Royal Conservatoire of Scotland) & in 1996 she lectured in music technology for Glasgow University. Her music has been played on all five continents & has been broadcast  in the UK, USA & Europe. In 2019 she received A Lifetime Achievement Award from Scottish Women Inventing Music.  She has also published editions of baroque music & has been a newspaper & BBC critic. Her own music is published by Furore Verlag.

Katy is Director of the Glasgow University Chapel Choir having completed her PhD in 2016. She is also Musical Director of Scottish Opera’s Community Choir, conducts Tartan Tones and Glasgow Madrigirls.  She conducted Cathures (chamber choir) between 2008-2015. Katy is also a regular conductor with the University of Glasgow Choral Society. Katy works as a choral conducting tutor with Sing for Pleasure and with the Glad Foundation’s Children’s Choir.

As a singer Katy  performs with the harmony folk-groups Muldoon’s Picnic and Crying Lion and the early music ensemble Sang Scule. She also sings with chamber choirs Serafine and Sine Nomine.

Her compositions and arrangements for choir have been widely published and performed, and she was commissioned by Scottish Opera to write the score of the children’s opera KidO

Katrina completed an MMus and PhD at the University of Edinburgh and was appointed to Napier University in 2007. She is currently Programme Leader of the Bachelor of Music degree.

Her music is informed by a variety of artistic disciplines: painting, sculpture, photography, architecture and dance. Her work has been performed by the Orchestra of Scottish Opera, the BBC Scottish Symphony Orchestra, NYOS: Futures, the Concorde Ensemble, the Research Ensemble and the Edinburgh Quartet with performances in the UK, the Republic of Ireland, France, Spain, the Netherlands, Malta, Australia, South Korea and the US.

Electra Perivolaris (b.1996) is a composer and pianist from Scotland. In July 2019, she graduated with Honours of the First Class from the Royal Conservatoire of Scotland, as a BMus Joint Honours student of Composition and Piano, winning the Patron’s Fund Prize (Royal College of Music) for Composition, as well as receiving an Endorsement in Music Education with Distinction. She is currently studying composition as a postgraduate student at London’s Royal Academy of Music, with further studies in piano, after being awarded an RAM Trust Scholarship.

Electra has had her music performed across the UK and internationally by musicians of the BBC Scottish Symphony Orchestra, Hebrides Ensemble, London Symphony Orchestra, the BBC Singers, Red Note ensemble and DeCoda ensemble in venues such as the Royal Festival Hall, BBC Maida Vale Studios, LSO St Luke’s and Glasgow’s City Halls. She is an Associate Member of the London Symphony Orchestra’s Soundhub Scheme for Emerging Composers and is Ambassador for the BBC Proms Inspire Young Composers’ Scheme. Electra’s music is centred around the depiction of physical and emotional landscapes, reflecting on the natural world and our place within it and linking to her interest in folk music and the impact of music on community.

Sally is a well-known composer in Britain, and really requires no introduction. Scottish Voices will include her Songs of Emily Dickinson as the postlude to our forthcoming CD with Glynn Forrest and the Scottish Percussion Ensemble.